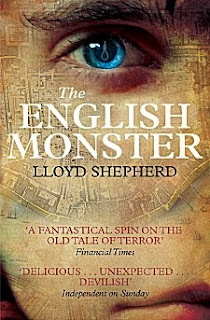 I wondered if Lloyd Shepherd had done yet another take on the Ratcliffe Highway murders of 1811, the first real English serial killings, known to all from De Quincey's Murder Consider'd and The Maul and the Pear Tree, the classic work from P D James and T A Critchley.

But no.  Shepherd has done something else entirely, a mash-up of fact (heavily based on James and Critchley, as he freely admits) and a separate storyline which begins 250 years earlier.  To say more would be to give the game away and I hate it when reviewers do that.  Suffice to say, Shepherd brings off his fantastical trick with considerable aplomb.

It has to be said, though, that the traditional stuff - the researched material which for most of the book sticks closely to the facts - works better than the imagined.  One reason for this is that his London is realised in such detail whereas other locations (Jamaica, South America) are poorly imagined.  I frankly have no idea where the Potosi Mine is or was.

Also, the monster becomes a monster with startling alacrity.  I would have liked more on the disintegration of his personality.

But I carp and I shouldn't, because The English Monster held me from start to finish.  If it didn't manage to horrify, it nevertheless intrigued and entertained.  And for a debut novelist, that's some achievement.  Recommended.