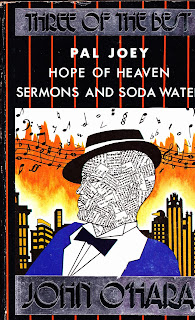 Like his contemporary Nathanael West, John O'Hara was a master of the novella in an age when the fashion was for full-length novels.  So here he has to bundle the title novella with a load of his short stories.  The stories are all very well - typical New Yorker fare - but my interest is in the novella.

The year is 1938 - Hope of Heaven came out the same year as the much better known Pal Joey.  Malloy is a scriptwriter in Hollywood.  He has money, he has a girl - not a Hollywood girl but a sensible girl who works in a bookshop and who lives with the brother she has to all intents and purposes raised.  Then one day gets a call from a guy who claims to know his brother back home in Gibbsville.  This Don Miller wants to meet up with Malloy but never quite gets there, and when he does he turns out to be called Schumacher.  The real Don Miller lost his travel cheques; Schumacher found them and has been living off them ever since.  He thinks someone's after him, a detective hired by the insurance company.  Malloy has no interest in the guy or his problems.

Meanwhile Peggy's long-lost father pitches up, an ageing charmer with an anecdote for every occasion.  Malloy sees through the facade but takes a shine to him all the same.  And thus the seeds of tragedy are sown.

O'Hara is a tremendous writer, idiosyncratic yet amazingly readable.  His characters are all utterly convincing and he takes them down unexpected byways.  Seriously, strongly recommended.