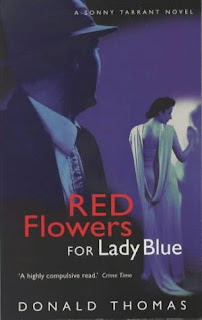 I had so been looking forward to reading this book.  Over the last year I have rediscovered Thomas's Inspector Swain series, realised he also writes as Frances Selwyn and in that guise, discovered his Sergeant Verity series.  Red Flowers for Lady Blue is one of Thomas's Sonny Tarrant series and I shall not waste my time with another.

Tarrant is supposed to be a sort of latter-day Moriarty or Fu Manchu, the spider at the hub of the underworld web.  He lives at the seaside with his doting mum, which is a nice touch, but other than that is about as frightening as a Chelsea bun.  We are told he is behind all crime and held in awe by lesser crooks, but we see none of it.  The idea, I suspect, is that behind the suits and hail-fellow-well-met attitude Sonny is murderous and amoral.  In this novel, however, the idea is not made flesh.

There are far too many characters and the plot is too convoluted.  Things happen - we are supposed to accept that Sonny is pulling the strings - but we don't see him do it and there is no explanation of how it is done.  For me, the most interesting character was Sonny's lawyer, Stan Bowlett, night-school educated and sharp as a switchblade.  The biggest disappointment was the title character, who starts off a sex-mad vamp but rapidly fades into the background.  She is of zero relevance to the plot.

The setting is 1936 - Abdication year.  As it happens I know a lot more about that era than I do the Victorian world of Swain and Verity.  I am not happy with Thomas's period touches - was David Niven a big enough star at that point to have the moustache named after him?  Surely it would have been a Roland Colman at that date.  The fleeting theatrical background, on which I am an expert just as Thomas is an expert on the Victorian underworld, also fails to convince.  I'm sure the Ivor Novello and Jack Buchanan shows mentioned are right because they're easily Googled, but I don't feel he's explored these mercurial characters at all.  Dicky Dash, Thomas's version of Max Miller, is much more entertaining and should have been given a proper role in events.

As I say, a disappointment.  Another further works by Thomas aka Selwyn will have to be pre-Millennium for me.
Posted by rogerwood at 15:49