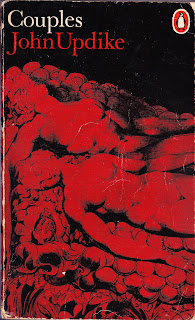 Written in 1968 but set in 1963-4, Couples is Updike's take on the sexual revolution as it was happening.  Ten couples in Tarbox, Massachusetts, mix, recreate, swing and fornicate.  It's the spirit of the times - after all, even the President is doing it.  But first Kennedy's baby dies, then Kennedy himself.  Piet Hanema and the pregnant Foxy Whitman outrage their social clique by becoming serious about one another.

Piet is the nearest thing we are given to a protagonist.  The bald dentist Freddy Thorne is, if anyone is, the antagonist.  But ten couples means twenty individuals; not all of them are equally active in the narrative and, unfortunately, none of them are especially likeable.  I would go further: some are more obnoxious than others.  I found it really hard to care.

That said, there is some wonderful writing here.  Updike is writing a modern novel, so he does it in a modern style.  Sometimes, with contemporary jokes and 'hip' talk, it doesn't retain its power forty-five years on.  Other passages, though, are simply magical.  There is a seascape towards the end which more than compensates for the tawdriness of some of the preceding material.

I was impressed.  I was not moved.