Hell is a City - Maurice Proctor 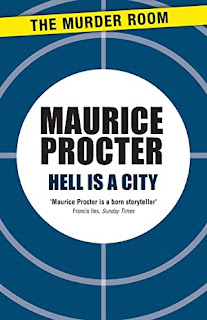 I knew there had to be one somewhere!  A fellow Nelsonian who wrote classic British noir crime fiction.  And here he is, Maurice Proctor, one of the founders of the form, with this very novel in 1954.  Ok, Nelson might have its hellish side but it's not a city.  The city here is Granchester, not to be confused with the Old Vicarage at Grantchester, but very much to be confused with Manchester in the immediate aftermath of World War II.

The armed robber Don Starling has escaped from prison and is believed to be headed home to Granchester.  There, his lifelong nemesis Inspector Harry Martineau awaits.  The two men went to school together and hated one another even as children.  Meanwhile a local bookie's female assistant is snatched while taking the St Leger proceeds to the bank.  Martineau finds her body out on the moors.  Is Starling involved?

What gives this fairly ordinary crime caper its noirish flavour is the linkage between police and criminals.  Not only do they live and work alongside one another, but both draw the line and killing a young woman for money.  Martineau and the robbed bookie both have unhappy marriages.  Martineau is not the pillar of rectitude he appears to be.  He drinks too much and is inevitably drifting towards an affair with a local barmaid.  Any hint of impropriety will extinguish his hopes of promotion.  Recapturing Don Starling, on the other hand, will guarantee advancement.

The Starling and Martineau narratives run alongside one another - another noirish trope.  They come together in a spectacularly set up rooftop showdown in the city centre.  By this point Starling has nothing left to lose and Martineau no longer cares about promotion.  Both men are armed - perfectly credibly - despite the fact that in 1954 no British coppers routinely carried weapons.  And glowering over their deadly encounter is the shadow of the hangman, the legendary Albert Pierrepoint, whose equally legendary pub is namechecked in the book.

I'd never heard of Maurice Proctor.  Thank goodness for Murder Room and other reprint publishers. Hell is a City - great title for a fantastic story. I've already bought another Martineau in ebook.  Can't wait.