Phew! Took me four weeks to read but, overall, it was worth it. 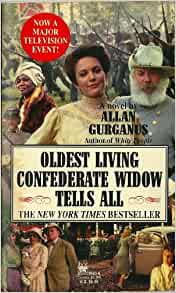 For a first novel, with a rotten title and almost 900 pages, Oldest Living Confederate Widow Tells All was a massive best seller in its day.  It spent 8 months in the US charts and was adapted into a TV mini series (of which this version was the tie-in) and ultimately a one-woman stage play.  It is the story of Lucy, 99 years old and living in a residential home, and her marriage to a veteran three times her age.  So far, so Little Big Man, and that, I admit, was what drew me.  In fact it is very different because Lucy tells tales, mainly the tales her old man told when he was elderly and a fixture on the speaking circuit.  There are also her tales, and those of her former slave friend Castalia, all told in the voices of the characters.  Lucy then tends to undercut these yarns with the truth, or at least the truth as she sees it.  And so about 150 years of Southern US history is covered.  The main event is Sherman's trail of burning mansions, including the one Lucy's husband should have inherited.  His mother burns in it too, but survives, horribly burnt, and hers is perhaps the most affective tale.  It all ends with a twist I did not see coming. I got frustrated with the reading time involved but I have to recommend it. These characters will linger in my mind a long time and my own work will inevitably be influenced.