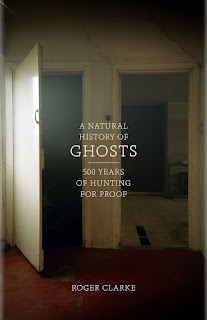 The title is a play on Pliny, the man responsible for so much of the world's nonsense, including (probably) ghosts. Roger Clarke is himself a ghost-hunter, but the vast majority of the cases he reports here are fake, up to and including Most Haunted on Living TV in the Nineties and Noughties.

Books like this used to be a staple when I was young - by names like Peter Underwood and Hans Holzer - but it seems the scandals that killed off Most Haunted and Living TV also put paid to the genre for a while.  That's a shame because many literary greats either wrote the occasional ghost story (Daniel Defoe, Henry James and, of course, Dickens) or even specialised (M R James and Sheridan le Fanu).

Clarke has been diligent in his research and has found cases I knew nothing about. It is a shame the proof reading wasn't to the same level of diligence. You can forgive a self-published text but this is from Penguin for Pete's sake. I enjoyed it all the same.
Posted by rogerwood at 15:17