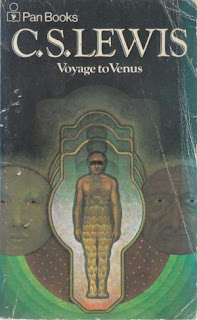 Voyage to Venus (originally published as Perelandra in 1943) is the second of Lewis's planetary trilogy, the successor to Out of the Silent Planet, which I reviewed here last year. The narrator - who, very cleverly, is Lewis himself - is summoned to the home of his friend Ransom, who has just about recovered from his trip to Mars. Ransom has now been summoned to Venus where the Black Archon is up to no good. Ransom went to Mars, it will be recalled, in Professor Weston's spherical space ship. This time he will travel in, of all things, a coffin transported by the Oyarsa of Malacandra. (For the uninitiated, Malacandra is Mars is the Old Solar language, Perelandra Venus and Thulcandra is Earth. Each planet has a guardian angel subject to the Creator Maledil, and flitting about the Higher Heavens are invisible angelic beings called eldils.) We know that Ransom survives the journey because he returns, by the same means, at the end of Chapter Two, He then tells Lewis what he has been doing on Venus and, more importantly, what he learnt.


This is what makes Lewis's sci fi so different. As much time is spent on moral discourse as on adventure. The worlds of his imagination are theatres for the exploration of spiritual tenets. Venus is thus the Garden of Eden before the Fall. The only humanoid character Ransom meets is Eve. She is naked - as is Ransom, because nudity is very much a prerequisite of space travel for Lewis - and green. She is Queen and there is a King but she cannot meet him because Maledil says so. Venus is mainly a watery world. There are floating islands, which are where most of the action takes place, and somewhere out there is the Fixed Land, which the Lady cannot visit because the King is there.


One day an object falls into the sea. It is Weston's spaceship with Weston aboard. He seems to have undergone some sort of character change since Ransom last saw him on Mars. He has given up the imperialist intent of colonising the planets for Earth and stripping them of their minerals. He claims to have been sent to Venus on a mission very similar to Ransom's. Gradually it becomes clear - Weston is the Serpent to the Lady's Eve. He teaches her about clothing (fortunately, it doesn't last) and killing birds and beasts for personal adornment. Ransom realises it is Weston he is meant to stop. He attacks him - he kills him - but Weston cannot die. In what for me was the highlight of the book he becomes a zombie, an Un-Man animated by the malevolent spirit of the Archon.


The breadth of Lewis's imagination is absolutely astonishing. There is a long passage in which Ransom escapes from the underworld (evocative of Dante's escape from Hell by climbing up Lucifer's bare back) pursued by the remnants of Weston. Each cave is made different, each shaft unique. Accompanying Weston is a sort of giant insect which Ransom automatically assumes is a monster. Lewis even takes the time to explore the alien structure of the cave opening through which Ransom regains the light.


A second astonishing volume, then. I really cannot understand why these works are not better known. They are unique, imaginative, stimulating and as thoroughly English as Milton or Blake. One more to go, the ominously-named That Hideous Strength.