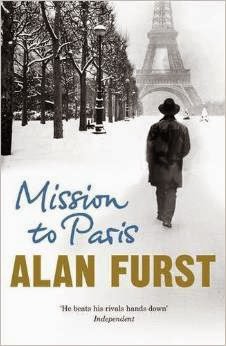 Furst really pins all his colours to the 'eve-of-war' scenario.  We know The Spies of Warsaw is 1938, Midnight in Europe was definitely 1938 (see my earlier review) and now Mission to Paris is set ... guess when?  And it's also set in Paris, so no surprises there.

In this case, our hero is Frederic Stahl, a Viennese adventurer turned Hollywood star - a sort of cross between Anton Walbrook and Gary Cooper.  He has been loaned by Warner Brothers to Paramount who want him to star in a European feature about the aftermath of World War I.  Stahl lived in Paris as a young man and is more than happy to revisit.  Equally keen to renew old acquaintance are his colleagues from a brief stint in the Austrian Embassy in Barcelona.  Now, since the Anschluss, part of Greater Germany, they ostensibly want Stahl to chair the judging panel for a German festival of mountain films (a neat and historically accurate touch).  Of course, they also want to claim him as a fine specimen of Aryan manhood.  Stahl is repelled by Nazis and flatly refuses, but is then persuaded by American diplomats to act as their go-between with agents high places in the Reich.  Thus Stahl is launched on the other Furst trope, spying.

It's a cracking read.  One advantage of Furst's narrow canvas is that you can be sure he really knows his period material.  As a much-travelled man, his geography and cityscapes are equally reliable.  Most importantly, he manages to bring so much that is new to each 1938 European spy novel.  Here we are completely misled, not once but twice, as to the girl Stahl will really end up with.  Furst manages to keep the tension going until the very last page and still tie up all loose ends, which is pretty damn clever.

For me, the highlight was the movie Stahl is making, Apres la Guerre.  This could so easily have been embarrassing, but Furst gets it more or less pitch-perfect.  This is exactly the sort of movie second-string American leading men were making in non-Nazi Europe in the late thirties and precisely the way the Europeans made them.

I liked Midnight in Europe a lot.  I liked Mission to Paris a lot more.  Top quality.
Posted by rogerwood at 17:41