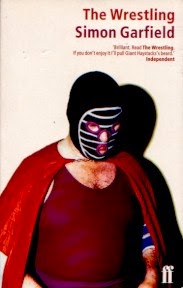 I bought this book when it first came out in 1996 and was prompted to re-read it by a mention on TV the other day.

The book is partly based on Garfield's earlier journalism but mainly on the memories of ageing grapple-and-groaners, gathered for a reunion at Wayne Bridge's pub in Greenwich in August 1995.  Distilled to its essence it might sound something of a cut-and-paste job but actually it is much better than that.  Garfield, like me, was a fan in his youth.  Given he is more youthful than I am, I fear he missed some of the greatest days - for example I went regularly to the wrestling when I lived in Middlesborough 1976-77, and saw Giant Haystacks fight Kendo Nagasaki (pictured, sort of, above).  Nagasaki is one of the stand-out characters in the book.  He doesn't speak - he never speaks, even on radio - but others speak about him with a certain awe.  He was spectacularly dedicated to his business and has never dissed it.  He is identified here but it matters not - without his mask and ring character he really is nobody.

The other stand-out who doesn't speak directly is Les Kellett, a middle-aged clown in the ring but very odd and extremely hard out of it.

Because mine is the original edition (there has been an update), Garfield only covers the first ripples of US superstar wrestling on the British scene.  He interviews a young Triple H, and Shawn Michaels when he still had a full supply of hair.  Unfortunately he doesn't get to Vince McMahon or any member of the Hart family, which became linked with two of the greatest British exports.

I remember seeing the Dynamite Kid, at Middlesbrough, when he was only 17 or 18.  He paved the way for British wrestlers in America, essentially the WWF.  Now the Kid is back in England and disabled, and his cousin Davey Boy Smith, the other half of the British Bulldogs, died in 2002 before he was 40.  Smith is interviewed here, at the height of his fame, and you can't help sensing the tragedy to come.  Already, in 1995-6, the Dynamite Kid was a reclusive, excluded figure.

Garfield's narrative is the death of British professional wrestling after it was dumped by ITV in the late 1980s.  You get the impression it was never much of a game, despite packed houses all round the country.  The wrestlers were never paid worthwhile money and the promoters ran a typically exploitative closed shop.  I get the impression that some pro wrestling still goes on in the UK - that must be a pretty tawdry affair.
Posted by rogerwood at 13:01