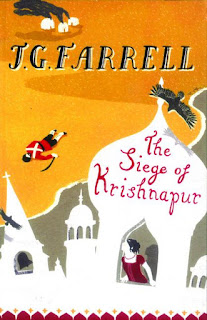 The second of Farrell's Empire Trilogy, and the second Farrell I have read, The Siege of Krishnapur is set during the Indian Mutiny of 1857, after which Britain could no longer contend that the subjugation of the Indian people was beneficent or paternal.  The residents of the fictional compound at Krishnapur have no knowledge of the native people, even those who live in the compound with them.  They do not hate or despise them, they simply do not regard them as human beings on the same plane as themselves.  The sepoys who lay siege are savage and are granted no more motives than the white ants that infest the residence library.

The characters are, on the surface, types, more than often than not referred to as the Collector, the Magistrate, the Padre.  But Farrell is much more subtle than this would suggest.  The Collector ends up using the collection to buttress the mud rampart, the Magistrate, once a radical Chartist, seems to welcome violent change although he still does his duty as de facto deputy commander of the compound.  The Padre, pillar of High Anglicanism, becomes an apocalyptic ranter, and the two medical men who should be working together to help the sick and wounded fight their own mini-war over the causes of cholera.

The problem - the only problem I had with this otherwise magnificent novel - was that the women were not as developed as the men.  I found it hard, in the final chapter, to work out which woman had married the various men.  The women weren't cyphers and it was compelling to watch Farrell dismantle their privileged femininity as the siege progressed; it was perhaps that they all had the same dilemma and thus were treated, like the Indians, as a whole.

Krishnapur, of course, won the 1973 Booker Prize whereas its predecessor, Troubles, which I enjoyed slightly more, was a contender for the Booker that Never Was in 1970 and was awarded the Lost Booker Prize, on the popular vote, in 2010, which was when I read it.