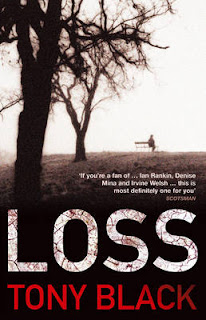 This is more like it!  Proper Tartan Noir and the best Tony Black I have read so far.  Loss is the third in the Gus Drury series, and noir is much easier with a non-cop as protagonist.  Gus, an unemployed ex-reporter with far too many dodgy mates is bound by no rules save personal honour.  He has friends, contacts, and even an ex-wife he's reunited with, but essentially he works alone.

It's coming up to Christmas - family time.  The snow is falling, Edinburgh is packed with Christmas shoppers - and Gus's respectable younger brother turns up with a bullet through his heart.  We have the perfect scenario for an amphetamine-fuelled quest for revenge.

Black's writing is pitch perfect.  The side-of-the-mouth wisecracks, my favourite concerning the Scottish Parliament building:  "It was our national shame; well, one of them.  The cost had been the cause of massive anger and political recriminations, but none of the main players had lost their hats.  I'd read in the paper recently that, at night, the forecourt of the place had been taken over by skateboarders.  I saw their tracks now: wheel marks, skids and doughnuts on the concrete.  A half-billion skatepark - money well spent.

"Out the back of the parliament a Marks and Spencer food van was being unloaded.  Christ, this got my goat - did those bastards deprive themselves of nothing?  Fucking Markies food deliveries whilst half the country is on bread rations.  It boiled my piss."

It's also much easier to do noir in the first person.

The chase at the end is masterful and Black avoids the mistake of continuing after the resolution.  Indeed, the laconic pay-off that ends the book is as good as I've ever seen.  Top recommendation.