The Triumph of the Spider Monkey - Joyce Carol Oates

Hard Case Crime, my favourite brand of the moment, have really branched out. They now publish Stephen King and, that most literary of American writers, Joyce Carol Oates. I love Joyce Carol Oates and have done since I came across one of her earliest stories (pre-1973) in a collection from the Transatlantic Review..

What we have here is a novella from the same period, when Oates was still experimenting in authorial voice, and a shorter, linked novella from a couple of years later which has only ever been published in a literary journal. 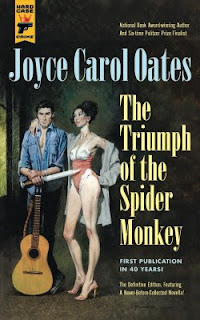 The Spider Monkey is Bobbie Gotteson, abandoned as a new-born in a locker at the bus station. Bobbie is raised in care and detention centres, with the inevitable consequences. Upon release as a man of around thirty, but still looking young if a little monkeyish, he drifts out West with his guitar and vague dreams of becoming a star. Instead he turns into something not unlike Charles Manson, who was still on trial when Oates conceived the story.

It must be stressed, though, that Bobbie is not Charlie. He keeps his mystic powers to himself and his disciples are all in his head. But we know from the start that he is on trial for a series of murders. Among them is a houseful of air stewardesses, only one of whom has escaped. She is Dewaline, who features in the other novella, 'Love, Careless Love,' in which another footloose young drifter, Jules, is hired by persons unknown, to spy on her - for reasons unknown - as she attends to give evidence at Bobbie's trial.

Jules cannot resist approaching her. Dewaline assumes he is the driver hired (again, by persons unknown) to take her north after the trial. On the road, they become as involved as two alienated young people can be.

Oates is always worth reading. These early works are fascinating - experimental, multi-voiced, moving by jump-cuts like a post Easy Rider movie. Together, they are like reading a gonzo report from the frontline of the death of the Sixties dream.
Posted by rogerwood at 12:14