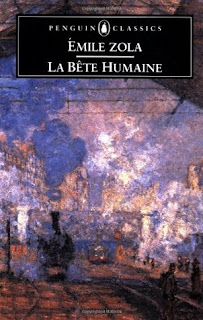 Zola's naturalism at its most extreme, humanity reduced to its most bestial. La Bete Humaine is really tough going. Everybody is determined to kill everyone else. Roubaud and Severine murder Grandmorin on the train between Paris and Le Havre. This takes place near the signal box run by Misard and the level crossing operated by his stepdaughter Flore. Misard is slowing poisoning his wife for her inheritance and Flore kills a dozen people because she is infatuated with her foster brother Jacques. Jacques's little problem is that he wants to murder every woman who excites him. He thinks that Severine has helped him over this minor difficulty and joins in her plan to murder her husband Roubaud. This is more than a tangled web. This is crazy. Yet Zola's gifts as a storyteller somehow carry the reader forward. It is one of those books you are going to finish, whether you like it or not. Personally, I'm not sure whether I like it. I certainly admire it. And I'm definitely glad I read it.
Posted by rogerwood at 10:21