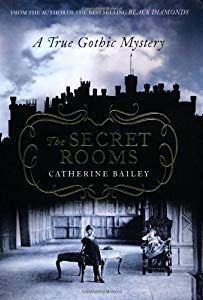 This is a captivating and unusual book. Bailey was granted access to the extensive archive of the Manners family, kept at Belvoir Castle in Leicestershire, home of the Duke of Rutland. Her aim was to research a book on the men of the Belvoir Estate during World War I. The current duke's great grandfather, Henry, had been a noted recruiter of volunteers for the Leicestershire Tigers. He had even offered to pay their usual wages while they were away.

On arrival she discovered the mystery of the secret rooms. This is where Henry's son John, the ninth duke had died in April 1940, aged only 53. More than that, he had locked himself in these humble 'business' rooms - excluding his family and some of the best doctors in the land - in order to work on the vast family archive. Moreover, it wasn't just the Manners papers that were stored there in 1940. The ninth duke had campaigned hard to ensure that huge chunks of the National Archive were secretly moved to Belvoir for safe keeping.

John himself had served in the First War. His father Henry had boasted that his own son - his only remaining son - was serving at the Front like the humblest farm hand. But Bailey soon discovered that the archives had been systematically edited - filleted by John - to remove all mention of certain periods in his life, including the latter part of his war service. Why? And who on Earth broke into the sealed rooms three nights after John's death?

As I say, it is a compelling story of arrogance, cowardice, bereavement and entitlement. Bailey builds the key characters as well as any novelist. Yet she is equally diligent in recording the problems of archival research. She answers the questions she set herself. Some solutions are sad, others downright extraordinary. She doesn't answer the one question I have always had about this truly ghastly family. How did they become dukes in the first place? They weren't warlords, nor royal by-blows. Sure, they owned and amassed inordinate land banks but so did many other families who came over with the Conqueror, and none of them became dukes. Other than pile up - and later lose - unimaginable fortunes, what did any of them ever do?
Posted by rogerwood at 12:38