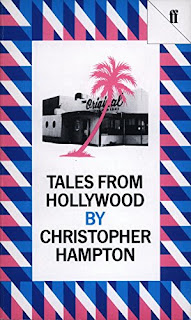 This 1983 play is about the emigre German writers who found refuge from the Nazis in Hollywood: Brecht, for example, but mainly the Mann brothers, Thomas and Heinrich. Heinrich was the elder brother and was famous for his novels before Thomas but who was then eclipsed by his more conservative, deeper thinking sibling. By the time war breaks out both are in Hollywood but only Heinrich is reliant on Hollywood. Thomas tours universities and is tipped for the Nobel prize; Heinrich is spendthrift, bibulous and has a younger, lower-class wife, Nelly.

Our guide to this inversion of the Hollywood Dream is the Hungarian playwright Odon von Horvath, who is himself a dream in this story, given that he was killed by a falling tree in the Champs d'Elysees in 1938. But here he befriends Heinrich, pays reverence to Thomas, and responds a little too readily to Nelly's drunken flirting. The play ends badly for Nelly but not for Horvath, because he is already dead and finally, symbolically, realises it.

Hampton is one of the best writers of plays in English of the later Twentieth Century. In the Eighties it was basically between him and Stoppard, and after 1990 neither of them has written anywhere near enough. Both wear their book-learning as a badge of authority and neither has reflected deeply enough on the human condition, having both been successful from an early age. That does rather show in Tales From Hollywood.

What is it about? Displacement? Thomas Mann was permanently displaced; he wrote the bulk of his work outside Germany. Brecht wrote masterpieces like Galileo in exile and Heinrich's fame had already faded by 1940. Hovath, the child of an empire that had vanished during his lifetime, was a resident of nowhere - literally, in the context of the play. The only real displacement here is Nelly, who caught the roving eye of the man who thought up The Blue Angel and rose above her station. Tales of Hollywood is not about the writers who have no tales to tell about Hollywood, but about Nelly, who came to Hollywood with no dreams left and already out of place.

The famous writers are slightly two-dimensional, apart from our narrator, Hovath. He is a fantastic character and the best actors must yearn to play him: witty, self-deprecating, omniscient, playful, charming. And Nelly... a dream part, surely, for an actress just entering middle age. At the National Theatre in 1983 she was played by Billie Whitelaw. Casting that says it all.
Posted by rogerwood at 14:49