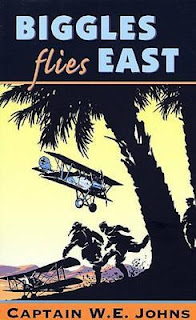 Biggles Flies East (1935) is the seventh Biggles book, albeit Johns only started to publish them three years earlier. It is, like many of the early installments, a book for young adults rather than merely boys. The plot is complex and there are serious themes. The accurate historical detail, as always with Johns, is laid on good and thick. It is not, however, racist. The Huns are enemies, not crazed loons, and even the nomadic Arabs are portrayed as men of honour. They are, nonetheless, all men. I cannot recall a single female character, let alone a significant one.

Essentially, the plot is this: Biggles is seconded to Palestine where a man known as El Shereef is inciting the locals to rise up against the British. He is sent undercover to the Germans, posing as a British-born German pilot. Here he comes up against the man who is to become his enemy over the coming decades, Erich von Stalhein, whom he soon concludes is another spy. The British equivalent of von Stalhein is Major Sterne, who Biggles glimpses one night as a shadow in a tent.

Meanwhile Biggles's oppo Algy acts as his go-between with Military Intelligence. When Algy comes under fire from the German ace Leffens, Biggles has to save him. The dog-fight which follows is superbly done, genuinely exciting. The plot resolves neatly in the end and all loose ends are tied.

I haven't read Biggles since I was ten years old, though I hoped to dig my old copies out of the attic. Instead I found this brand new reprint by Red Fox on the carousel in my local library. I was very impressed.