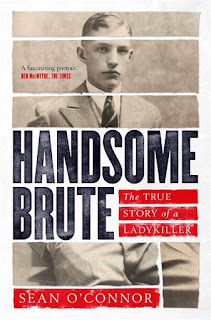 Probably the best researched book on sex killer Neville Heath, the 'handsome brute' of the title. Heath was brutish only in the way he treated the women he picked up in the transient world of London hotels in the immediate postwar period. He whipped them and he murdered two. But he was obviously debonair and charming - these women weren't idiots - and his wife in South Africa never accused him of violence. They divorced because he had married under a false name and was a convicted minor criminal.

O'Connor takes a critical view of his subject but doesn't really go into his mental state, issues raised at his trial, appeal, and in the Press. How deluded was he, if at all? That is and always was the question. He had a traumatic childhood with the death of a younger brother. He clearly had talent as a pilot and was undoubtedly brave in action. Because of his dishonesty he was court-martialed three times, yet did well in both the RAF and its South African equivalent. He was determined to serve. Was this heroism or a death wish? How do we differentiate between the two?

A book, therefore, that tells the tale thoroughly but leaves questions unanswered, which is not always a bad thing. Well worth looking out for.