I love Bulgakov. He is my favourite writer and wrote my favourite book, The Master and Margarita. The Fatal Eggs (1924-5) isn't in that league, but it is seeded through with bits of Bulgakov at his best. 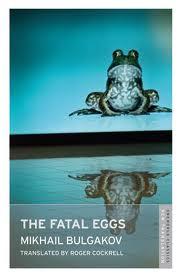 In 1928 (a 'future' four years after it was written) Professor Persikov invents a red ray that speeds up the reproductive process. His invention couldn't be more timely, because a plague has wiped out the poultry of several large provinces. Eggs are hurriedly imported and bathed in the crimson glow of Persikov's ray. Meanwhile the Professor returns to his zoological studies in which his specialism happens to be eggs. Unfortunately, due to a typical bureaucratic blooper, supplies of eggs get mixed up. Poultry farms receive the eggs of amphibians and reptiles while Persikov wonders what he's supposed to do with common or garden chicken eggs.

The outcome - for Bulgakov - is inevitable. Giant predatory reptiles run amok in the provinces and rioting Muscovites attack the scientists. It's all wild, comic and clever. Just as the common cold did for H G Wells' martians, so a premature frost polishes off the tropical monsters. But, being Bulgakov and not Wells, we are reminded that some poor wretches have to dispose of the rotting corpses.

A fine translation by Roger Cockrell perfectly captures the tone.
Posted by rogerwood at 12:46