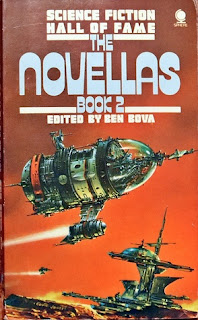 Another fascinating relic of Sixties and Seventies which I completely ignored at the time. Ben Bova's contribution is insignificant but the four novellas are all engrossing in their own way. Robert A Heinlein's Universe is on the hard side of sci-fi, set in a spaceship so big that is a world in itself, so far into its voyage that it has forgotten there is a universe outside. Vintage Season is by Henry Kuttner and his wife C L Moore (writing as Lawrence O'Donnell). Oliver takes in a family as vacantioners-cum-lodgers; they gradually reveal themselves as aliens on a visit to take in Earth before something happens. It would be crass to reveal what that something is, but it has to be said that the last line (which could easily be the first line of another story) is a stunner. The Ballad of Lost C'mell by Cordwainer Smith is the only novella here not written in the 1940s. It dates from 1962 and is pure Beatnik. It is extreme fantasy, set in a time when science has been sublimated, when "Earthport stood like an enormous wineglass, reaching from the magma to the high atmosphere." Jestocost is a Lord of Instrumentality whereas C'mell is a very girly girl, so girly that she is in fact a human-shaped cat, a homunculus. Yet Jestocost loves C'mell. The question is does she - can she - love him? And finally we have Jack Williamson's With Folded Hands, written in 1947 but still pertinent today because it is about the coming of the super-robots. The Prime Directive, a forerunner of Asimov's Laws, is brilliantly and bleakly enacted. It was for me the most effective novella in the collection, albeit Cordwainer Smith is a better writer.
Posted by rogerwood at 12:48