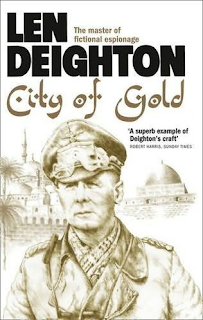 City of Gold is late period Deighton, from 1992. I don't remember hearing about it at the time and wonder if it wasn't the greatest hit. That said, even mediocre Deighton is better than most people's best and this novel is by no means mediocre.

The setting is Cairo, early 1942. Rommel is advancing on the city. The Allies cannot stop him. He seems to know their plans before they do. There is an obvious reason for this. Someone is leaking information. Major Cutler is heading for Cairo to find out who. He has a prisoner with him, Jimmy Ross, facing court martial for killing an officer. Cutler suffers a heart attack. Ross switches identities with him. He only intends to be Cutler temporarily, just until he can find a way of escaping properly, but events get the better of him. He finds himself wholly dedicated to finding the source of Rommel's information and in love with a beautiful girl called Alice.

Ross is by no means the only person pretending to be someone else. Cairo is full of people playing a role, whether it is the deserter Wallingford, pretending to be a special duty naval officer but in fact building a black market empire, or Dalrymple who has not formally deserted, just failed to answer orders. Then there are the sort of people who tend to gravitate to places like Cairo whether there's a war on or not. The Jewish financier Solomon, his Muslim opposite number Mahmoud and, best of all, the flamboyant Prince Piotr Nikoleiovich Tikhmebrazoff. On the fringes of this shady group is Peggy West, an English nurse whose husband Karl is supposedly working with the Zionist Jews in Palestine.

You can be confident Deighton has done his research. He tells us about it in his introduction to this 2010 reissue. The book is packed with colour and detail. Of course he knows his military history - Deighton has built a second career in the field. The story crackles along. Most of the storylines are resolved at the end. That said, it's not SS-GB.
Posted by rogerwood at 16:10