The Detective and the Devil - Lloyd Shepherd 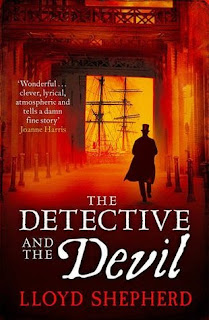 The Detective and the Devil is the fourth in Shepherd's historical crime series featuring Charles Horton of the Thames River Police. It is 1815, the year of Waterloo, and Horton is back on Ratcliffe Highway (scene of his debut case in The English Monster, reviewed below), this time investigating the murder of an East India Company clerk and his family. Horton finds himself drawn into the inner workings of "John Company", in those days still a private company but nonetheless ruling an imperial continent, with its own army and indeed investigators. Horton finds himself increasing ostracised but gets funding to visit the Company's most remote and yet most secretive holding, the island of St Helena. Here he finds the secret which the Elizabethan magus John Dee seemed to refer to two hundred years earlier.

The St Helena scenes are greatly enlivened by the presence of Horton's wife Abigail, former nurse and now formidable autodidact. The flashbacks to the days of Dee are great fun. Overall, though, I was slightly disappointed. It certainly isn't as good as The English Monster. Equally, it isn't a bad book and it wouldn't necessarily put me off the next in the series when it comes.