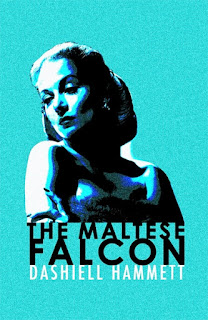 This is it, the original US noir detective novel from 1930. Hammett published most of his handful of novels around that time but only this one entered and changed popular culture forever via the iconic movie of 1941. What struck me straightaway on reading the book was how perfect the casting of the movie was. It's as if Hammett wrote Kasper Gutman for Sydney Greenstreet, Joel Cairo for Peter Lorre. They speak in the novel like Greenstreet and Lorre speak on screen. As for Mary Astor as the duplicitous sex siren Brigid O'Shaughnessy - well, perhaps the fairest thing is to say nothing. After all, they were hardly going to include the strip search scene in 1941. Bogart, of course, was never first choice for Sam Spade, yet Hammett gave Spade a Bogart-style lip problem.

The thing that makes The Maltese Falcon so revolutionary in both versions is that Spade is morally conflicted. He generally tries to do the right thing but he's not really bothered when his partner Miles Archer gets gunned down. He's already sleeping with Archer's wife Iva, and doesn't give two hoots about her either. He thinks he might be falling in love with Brigid; the next moment he's slapping her around. He's happy to do a deal with Gutman and Cairo whereby Gutman's 'gunsel' Wilmer takes the fall for three murders, and when Wilmer objects he knocks him out.

I can only recall trying one of Hammett's other novels, The Dain Curse. It was many years ago and I didn't get to the end. I don't remember what stopped me. Anyway, I will definitely be reading any more I might come across. I didn't realise there were only five of them, all written over a five-year period in his thirties, so it won't take me long.
Posted by rogerwood at 17:06