The Girl with the Deep Blue Eyes -Lawrence Block 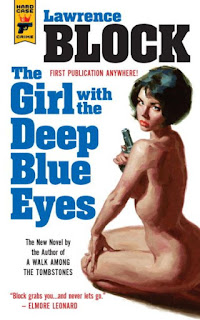 Earlier this year I discussed the extraordinary output of the American pulp maestro Lawrence Block. The novel I was reviewing then, Borderline, was one of his first. This is a Hard Line original, published in September 2015, and there is no appreciable difference. Well, perhaps just one. Here, Block borrows his core idea from noir movies like The Postman Always Rings Twice and Double Indemnity. He is perfectly open about it. His hero, ex NYPD officer Doak Miller, is a fan of old movies and gets his idea from watching them.

Now living in Florida, Miller does a little PI work to supplement his pension. The local sheriff, no less, has heard that a local woman is looking for a hit man to rid her of her much older, much richer husband. Miller agrees to meet her, wearing a wire. But first he checks her out, sees how gorgeous she is, especially her deep blue eyes. So he meets her as arranged but slips her a script whereby she changes her mind. Miller knows he will sleep with her - he already has one friend with benefits and he's not long in town - but doesn't realise he will fall in love with her.

It gets complicated, of course. Miller meets with the girl's horrible husband. The horrible husband hires him to investigate his wife, whom he suspects is having an affair. Miller also learns about the pre-nup whereby if they divorce there's no big pay-off. The husband has to die for his widow to get her due. It's all a question of how to do it.

Block still writes like a dream. His characters are multi-faceted, with flaws and predilections. They are ruled by sex and, to a lesser extent, money. What grips the reader, though, is the layering of story, each layer, no matter how bizarre, inextricably linked to the main narrative.

An absolute gem. Essential reading for any fan of modern US crime fiction.
Posted by rogerwood at 14:42