A Casebook of Murder - Colin Wilson 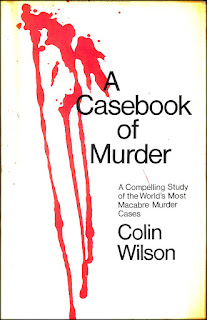 Colin Wilson's reputation seems to have faded slightly since his death in 2013. In life he always seemed to be putting out a new book or giving his take on some arcane subject in the press or on TV. Once, of course, he was very famous indeed, not only an original angry young man but one whose debut book The Outsider sought to create a new philosophy for the era of angst. Now, though, he is very much out of fashion. His vast works on the occult are passé, whereas back in the Seventies they held pride of place on any reputable bookshelf. The same goes - with knobs on - for his many volumes on murderers, of which this (from 1969) was an early example.

The problem here is not the concept, though Wilson's preoccupation with sex sits less comfortably now than it did back in the day/ It is the fact that hundreds of lesser lights have attempted similar compilations and lowered the tone. They cobble together cheap cash-ins, whereas Wilson is absolutely serious in intent. That may be another problem. He does tend to make declamatory assumptions which are easily refuted. I tend to think he can forgiven the odd gaff, given that he was ploughing such a lone furrow.

The overarching idea here is that different eras get different kinds of killer. He starts with the late medieval period, then the time of Sheppard and Wild. The 19th century, in which the western world passed from rural villages to sprawling industrial cities and, finally, to the dawn of scientific criminology, warrants four chapters. We end, of course, with two-thirds of the 20th century. When Wilson signed off his book the Moors Murderers were beginning their life sentences and Mary Bell, the Newcastle child killer of children (whom I had remembered as Glaswegian for some reason) was still on trial.

There are many fascinating ideas here but too much is recycled from Wilson's earlier Encyclopedia of Murder (1961 - co-written with Patricia Pitman) or cobbled together from inherently unreliable newspaper reports. Wilson would go on to recycle lots of it many more times over his remaining forty years. That said, there is one reason for Wilson always standing at the head of his field. His Ritual in the Dark (1960) is the best novel ever written about a serial killer and by a distance the most terrifying.