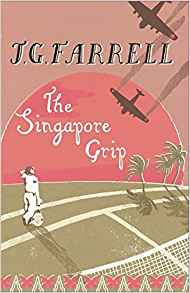 The third of Farrell's Empire Trilogy, The Singapore Grip lasts an enormous 672 pages, yet manages to end far too soon. It starts in 1937 and ends with the fall of Singapore in February 1942. I wondered if Farrell had planned a sequel before his sudden death in 1979 but the tone of the conclusion doesn't really encourage the thought.

In line with the other two-thirds of the trilogy (Troubles and The Siege of Krishnapur, both reviewed earlier on this blog) Farrell traps his English colonials among rebellious locals. Here, he focuses on the Blackett family, one half of the great mercantile house of Blackett and Webb, which is planning to celebrate its jubilee. The firm's founder, old Mr Webb, has been retired for the past seven years, keeping largely to his bungalow and indulging in eccentric pastimes like watching athletic Malayan ladies exercise naked. Walter Blackett, in sole control of the firm, is inevitably thinking of the future. At one time it was assumed that his daughter Joan would marry Webb's only child Matthew and thus the firm would pass seamlessly to the second generation. But Matthew has suffered a progressive education overseas and is now working, so far as anyone can tell, for peripheral agencies of the League of Nations. Joan, meanwhile, whilst undoubtedly good-looking, has taken to playing fast and loose with the affections of impecunious young men like her current American, Captain James Ehrendorf.

Then old Mr Webb dies and Matthew has to be tracked down and brought to Singapore where his intentions for his inheritance can be properly examined. Fortunately Ehrendorf was at university with Matthew and can help locate him. Matthew eventually arrives, too late for the funeral (there's a war on, you know!) and turns out to be as woolly-headed and progressive as everyone feared. Attempts are made to marry him into the safekeeping of Joan who, for all her flirtations, has a much shrewder head for business than her blustering brother Monty, but Matthew much prefers Vera Chiang, one of his father's live-in young ladies.

The book is a traditional English comic novel on a grand scale. There are dozens of peripheral characters, all of whom are memorable - the stuttering Sinclair; Dr Brownley, who invariably dines with the Blacketts but never offers to reciprocate; the failed French diplomat Dupigny, who sleeps on a table at the Webb house. The best scenes, for me, involve the hopeless GOC of the British Army, though there is one brilliant scene involving a Japanese soldier trying to live up to the legacy of his national hero father.

The Singapore Grip is just as dazzling and brilliantly written as Troubles and The Siege of Krishnapur. Farrell has now been dead forty years but his major works, being broadly historical, have not dated. I was surprised to learn from the front matter of this Vintage paperback that there are at least four other novels. I must try and get hold of one.
Posted by rogerwood at 15:45