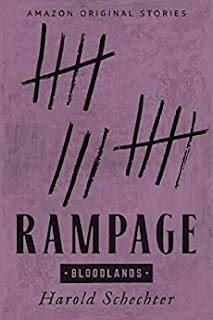 Rampage is one of a series of short, true-crime stories published as Amazon Originals. The collection is called Bloodlands. This one is a good place to start because it covers the first modern rampage shooting spree, the 1949 case of Howard Unruh.


Now, I fancy myself a keen student of true crime but to be honest I'd never heard of Unruh. This I find odd. The spree itself is unbelievably bad - he shot and killed thirteen, including three children - and survived. That's perhaps the oddest thing. Most spree killers are their own final victim. Others turn on the police, knowing they'll be killed. Unruh did take a few shots at the local cops when they arrived at his home, but he soon surrendered. He not only answered questions at the time of arrest, he went on answering questions for the remaining sixty years of his life. He wasn't executed, he never even went to prison. He was incarcerated in the local mental hospital. No time limit was set but in Unruh's case it meant life. He was 89 when he died, 29 when he went on his fifteen minute spree in Camden, New Jersey.


And despite all the questions, he never really explained what made him do it. His neighbours were simply getting on his nerves. He thought they talked about him, about the fact that he didn't have a job and lived with his mother. But some of those he shot were unknown to him, some were children, far too young to have interacted with the asocial but polite young man. Schechter, who has written dozens of full-length true crime books and has a distinguished academic career, hints at the possibility of Post Traumatic Stress Disorder - Private Unruh served in the later years of WW2 and was something a crack shot - but possibility is all it is. Unruh never claimed to have been traumatised by anything. He knew he had done wrong, he seemed to regret it, and knew he would be rightly punished.


In lesser hands, Unruh's story could have been stretched and padded interminably. Schechter recognises that the defining quality here is brevity: the short time the spree lasted, the alarming number of victims (almost one a minute), and finally the long enigmatic and persisting lack of explanation. Schechter's prose is precise and purposefully flat, letting the horrific facts speak for themselves. It's a perfect commuting read and the presentation, with contemporary photos and the checkmarks from the cover ticking off each victim, is really clever. I have already bought others in the Bloodlands Collection and will doubtless buy more. There are currently six.
Posted by rogerwood at 15:52