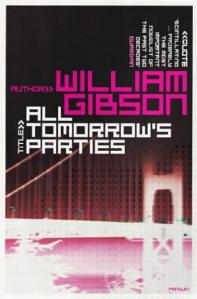 All Tomorrow's Parties - a title always guaranteed to snag the attention of a Velvets' fan like me - is the third part of Gibson's late-90s Bridge Trilogy. The others are Virtual Light and Idoru. I haven't read either of those but I'm certainly going to now.


I love Gibson and I loved this book. The bridge in question is the Golden Gate, which has been taken over by interstitial settlers since the long overdue earthquake made it unsafe for vehicles in the early 21st century. People there live in small re-purposed containers and sell stuff to tourists. Meanwhile in Tokyo, Colin Laney lives in very similar conditions in a subway station. There he immerses himself in the net in search of nodal points and his idoru Rei Toei, a seductive holograph. Laney sends ex-cop Rydell to collect the projector carrying Rei Toei. Rydell's next port of call is the bridge where he encounters his former girlfriend Chevette, also returning to the bridge where she lived with a previous lover.


From there on in, it's the beginning of the end of the world as bridge-dwellers have come to know it. I won't reveal any more because the plotting is so wonderfully tight. The dialogue is sharp, the prose sizzles with cyperpunk connectivity. Nobody but nobody does it better than Gibson, the Elmore Leonard or Stephen King of near-contemporary dystopia.
Posted by rogerwood at 15:21