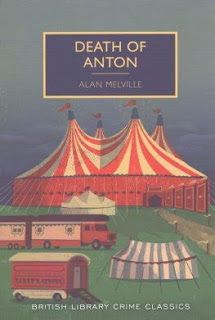 Alan Melville (1910-83) was one of those bright young men who became a jack-of-all-trades with the BBC (producer, writer, performer) before World War II. I remember him on television in the Sixties. He is almost entirely forgotten now and I for one did not know he had written crime novels in his twenties. So many thanks to the British Library for adding Death of Anton to their Crime Classics reprints series.


The detective, Chief Inspector Mr Minto (there is no first name) is such a brilliant creation that you can't help wishing he had spawned a series. His much younger sister is about to marry a vacuum salesman and Minto is in town for the wedding, which will be conducted by his brother Robert, a Catholic priest. Carey's Circus is also in town, and the Mintos are at Dodo the clown's party when Anton the tiger-tamer is found dead in the tiger cage. The initial view is that the tigers mauled him, but Minto of the Yard is not fooled. He spots three bullet wounds.


Melville was a famous wit and this is therefore a light-hearted romp. Minto is very funny - but nobody's fool - and the circus setting guarantees a cast of eccentrics for Melville to play with. The mystery is well-plotted and I certainly did not guess who had done it or why. Entirely satisfactory on every front. As I say, the shame is there was no follow-up. After the war Melville channelled his comic talents into musical theatre and that is somewhere I wouldn't venture at any price.