The Devil in the White City - Erik Larson

I first found Erik Larson when I acquired his book about Crippen and Marconi, Thunderstruck, reviewed here in February 2016. In that review I alluded to this book, which likewise combines the US serial killer H H Holmes with the building of the Chicago World's Fair, which effectively supplied him with victims during the summer of 1893. 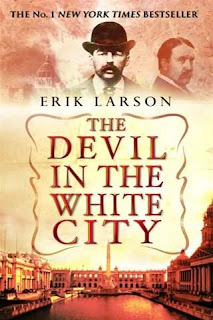 The idea, on first glance, seems terrific, but like Thunderstruck there are problems. In Thunderstruck it was the fact that not only did Crippen and Marconi never meet, they were rarely in the same country. Marconi did not invent wireless telegraphy in order to catch Crippen, it just happened that his invention was used in Crippen's capture. Also, the point of interest with Crippen is that he was such a meek man, the worm who literally turned on his appalling wife. No one can accuse H H Holmes of similar shortcomings. He was the ultimate predator, killing for the simple pleasure of being there at the death. Then there is his purpose-built hotel of horror, with its built-in gas chambers and chutes to the basement for easy disposal. On the other hand Marconi was always interesting in everything he did, whereas Daniel Burnham was only one of many architects who worked on the World's Fair, albeit he was the team leader. His partner John Root was the visionary behind the scheme but died before work began. Far more interesting than Burnham are the landscape designer Frederick Law Olmstead, driven mad by overwhelming toothache, and the mercurial George Ferris who came up with the awesome wheel which saved the fair's financial bacon and was probably the single defining legacy of the show.


The main problem, however, is that the six months of the fair was only part of Holmes's murderous career. In a sense it was a deviation from his usual practice, which was to kill wives, mistresses and business partners for their life insurance. Too little is known of Holmes for him to be anything other than an enigma. He was not caught until more than a year after the fair ended and during a long time in prison he wrote his own story for money - three 'confessions', each more appalling than the last. How much, if any, was true? How many did he really kill? We will never know. One mystery that sticks with me is who did he leave the money to? Tracing his heirs, several of whom he had almost certainly killed and others who probably were not as legally entitled as they assumed, would be a real tangle to unravel.


Larson's research is again hugely impressive. I love his declaration that "I do not employ researchers, nor do I conduct any primary research using the Internet. I need physical contact with my sources, and there's only one way to get it. To me every trip to a library or archive is like a small detective story." You and me both, Erik - not that I could afford to use researchers even if I wanted to. And he writes like a dream, always pitch-perfect, never remotely dull. I will certainly snap up the next book of his I come across. I quite fancy Dead Wake about the sinking of the Lusitania.
Posted by rogerwood at 17:03