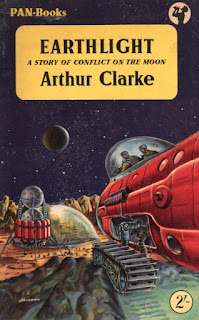 Two hundred years in the future (from 1955) Earth has colonised the planets of the Solar System. Generations of humankind have been born and lived off-Earth. The situation is not much different from that of the British Empire in 1939 - the subordinate states are too big, the dominant hub too small and too demanding. The Earth is considered to be withholding essential heavy metals from the Federated planets. Conflict is inevitable and imminent.


For this reason Bertram Sadler, accountant, is sent to the Moon to try and track down whoever is leaking secret information to the Federation. The Moon consists of Central City and peripheral specialised bases, like the Observatory Sadler is officially auditing. But the Observatory's work is hampered by unknown traffic. It turns out an unauthorised base is being built nearby. Is this the first act of war by the Federation?


It all sounds like the perfect plot for a sci fi thriller. But, this being Arthur C Clarke early in his career, there are no thrills. Indeed, we are lucky to get a plot. What Clarke is interested in is the science. Sixty years on, of course, the science is faintly risible. Men have colonised the solar system but are still reliant on teleprinters and analogue radio. Even television scarcely figures. The standout sections for me were the ones about light beams on the Moon and the limited effect of atomic weapons in space. I sincerely hope Arthur C was right on both counts.
Posted by rogerwood at 12:11