The Trouble With Lichen - John Wyndham 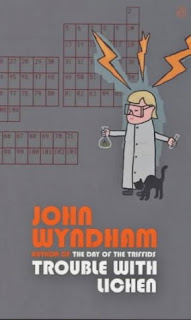 The Trouble With Lichen (1960) is a marked departure from Wyndham's usual output. It remains science fiction and as usual is set more or less contemporaneously. But it is a comic novel, hence what would otherwise be a horribly inappropriate cover. Is it funny? Not laugh out loud, certainly. It takes a comically quizzical look at what happens when an age-preventing agent is discovered by scientists. One tries to bury the discovery, though he cannot resist dosing himself and his children; the other sets up an exclusive beauty clinic. Both choices have repercussions. The truth is bound to get out eventually, and it very quickly does.


The writing is good, the idea close to brilliant. The problem is, Wyndham can't handle the God's Eye View. He sees too much, thus there is lots of so-called comic banter between working class types, stereotypical politicians and the popular press insist on getting involved. Wyndham would have done better by sticking to his two scientists, Francis Saxover (scion of a sort of Wedgwood/Darwen dynasty) and his beautiful and brilliant assistant Diana Brackley. I believe that would have forced him to work out his plot better in his celebrated 'logical' technique. As it is, the sending up of real newspapers like the Guardian and the Mail works well; that of obviously fictional papers like the Trumpeter falls flatter than any pancake.


Oddly, though - and very unusually for a science fiction novel - Lichen provides a convincing snapshot of the society for which it was written. It's a slightly qualified thumbs-up from me then.

Click here for a BBC interview with Wyndham the day after Lichen was published.
Posted by rogerwood at 17:31