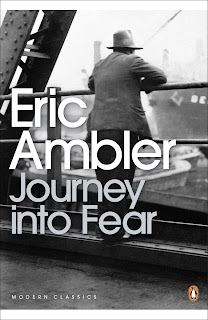 Eric Ambler (1909-1998) was the master of spy fiction. Before him there was John Buchan and whoever it was created Bulldog Drummond; after came James Bond. Without Ambler there would have been no Bond. Fleming absolutely stuck with Ambler's formula for success, though in my view his writing was never as good. Where Fleming outshone Ambler, however, was in having the continuing hero. Each of Ambler's major thrillers has a different hero and they tend to be middling men of no particular significance who by chance become embroiled in the machinations of nations. They are more like real spies in that sense and, given that we know they will not recur in the next book, we cannot be sure they will survive, which adds suspense utterly lacking in Bond.


Here, for example, Mr Graham, who lacks even a forename, works in a senior capacity for an international arms manufacturer. This being 1940, the firm's products are in great demand and Mr Graham - having survived an assassination attempt in Istanbul - is trying to get home to England on a cut-price ocean steamer. His fellow passengers are few in number. Any or none of them might be in league with the assassin, who also manages to slip aboard. That, in essence, is the story.


It is down to Ambler's skill as a storyteller that we remain enthralled. His characterisation is excellent, his writing strong. He uses narrative devices well beyond his successor Fleming. For example the first couple of chapters unfold in flashback. We are aware of Mr Graham's amended plan to sail aboard the scruffy steamer, then find out why he has agreed to give up his original plan to travel first class by rail. This gets excitement in good and early (the attempt on his life), introduces the femme fatale (the glamorous nightclub dancer Josette) and reveals the involvement of professional spies in Colonel Haki of the Turkish secret service.


Journey into Fear made an excellent film with Orson Welles as Haki. After the war Ambler moved to Hollywood to write and produce movies. He was extremely successful - I had no idea until I looked him up. He wrote the screenplays for The Cruel Sea and the best of all Titanic movies, A Night to Remember. That is how good he was. Better than Buchan, better than Fleming. The best.