Rather be the Devil - Ian Rankin 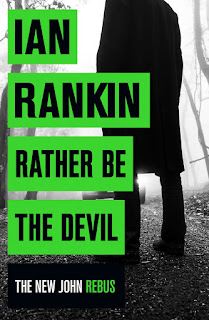 This is the 2016 instalment of Rebus and continues the high standard of recent Rebus novels. Again, Rebus is shadowed by the insipid Malcolm Fox, former Professional Standards chief, now attached to the Scottish Crime Campus at Gartcosh. Fox is meant to be the antithesis of Rebus, the good cop who plays by the rules, but he never manages to do so and is far too dull to do anything but get in Rebus's way. This was not the case in the two standalone Fox novels, The Complaints and The Impossible Dead, both of which I greatly enjoyed, but the sooner he is ditched from the Rebus series the better. The only contrast we need with Rebus is his former oppo Siobhan Clarke, whose character continues to add richness to successive novels.


The structure here is complex. Rebus is taking his mind off his health problems by looking into an almost forty year old cold case, the murder of Maria Turquand, strangled in a city centre hotel full of bankers and pop stars and crooks. The police, meanwhile, are investigating an attack on local gangster Darryl Christie. His gangland mentor, Big Ger Cafferty, is a prime suspect and so is Anthony Brough, the missing grandson of banking buccaneer Sir Magnus Brough, who was peripherally involved in the Turquand case insofar as his deputy was married to Maria. Thus Rebus is drawn in to the inquiry.


In fact, the cold case storyline rather fizzles out. The main story, however, is full of fun. Big Ger himself plays a full and active role - Rankin is so taken with him, indeed, that this edition contains a short story 'Cafferty's Day' "exclusive to Waterstone's" (which is not as impressive as it might sound, since Waterstone's is the owner of W H Smith's and now Foyles' and is thus the only British mass market book chain). In fact the story is neither here nor there. It could have been worse - at least it ties in to the main novel.


In summary, then: a top quality police procedural, as good as anything similar in the market and a good deal better than most. Rankin remains on top form, which is saying something given that 2017 was the 30th anniversary of the first Rebus.
Posted by rogerwood at 17:07