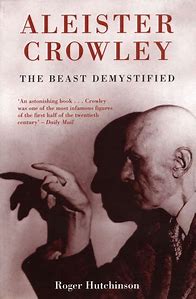 This is a refreshing take on the Crowley sub-genre. These are usually sensational or lurid, taking the tone of a couple of red-top scandal sheets that proclaimed the middleaged Crowley to be the wickedest man alive, the Beast of the Revelation personified. We should have looked more into these so-called newspapers. One was John Bull, the personal propaganda of the demagogue and fraudster Horatio Bottomley. Another was the Sunday Express, then as now a sad comedown for the chips wrapped in it.


Hutchinson's take is that Crowley was one of many ego-centric eccentrics who came to prominence during the Edwardian era. The sons of fairly wealthy men, they were public school educated (usually unhappily), unable to find a place for themselves in the newly globalised world and not rich enough to ignore the problem. Crowley, in these terms, was remarkable only in that he chose and stayed with occultism (or 'magick' as he typically called it). The fact that he stayed with magick is what set Crowley apart and what brought upon him the wrath of the right wing British press. Occultism had been fashionable in the 1880s and 90s, but in the Twentieth Century most dabblers moved on to full-blown fascism.


Hutchinson keeps it short, which is a wise move; too often, Crowley biographers feel obliged to fill space with endless quotes from the magickal lore which their subject churned out to maintain some sort of income. Regarding that sort of material as pure hack-work, and the press campaigns as entirely made up, Hutchinson ends up being surprisingly generous to his subject. He regards the Beast as a bad poet, though no worse than many others of his era, a mediocre novelist, and a really rather gifted writer of non-fiction. He certainly inspired me to try some of Crowley's fiction, which is apparently almost entirely autobiographical.