I'm a sucker for the who-really-wrote-Shakespeare genre. Let's get it straight, though - I don't for one moment that Shakespeare of Stratford was largely responsible for most of the plays that appeared under his name in 1623. He probably wrote most of Titus Andronicus and nothing of Comedy of Errors. For the late great plays - say, 1600 to 1610 - he wrote the vast majority but never all of the texts, which is why they are the best plays. He wrote very little of The Tempest or Timon of Athens or indeed Taming of the Shrew, which are mostly by John Fletcher. The so-called witty dialogue (or, as I prefer to think of it, space filler) in trash like Much Ado, As You Like It, is Thomas Middleton, and Middleton also wrote the witchy stuff in Macbeth. It is simply not possible for him to have written 37 plays in blank verse in a career of barely twenty years. Try it and see. Nor was it required. Stage plays were a team effort in Jacobeathan times, just as TV series are now. Shakespeare in his prime was team leader. He came up with the core plot, wrote the big speeches, and had final cut on the contributions of those lower down the food chain. The only bits he couldn't control were the clown bits (Will Kemp and Robert Armin), which is why they are so toe-curlingly bad. The reason nobody in Stratford seemed to notice he was a playwright is that they didn't know and didn't care; there was no theatre locally, and so far as the neighbours knew he was a prosperous merchant with a big house and two daughters likely to come with decent dowries. It is simply not true that we know more about other playwrights of the period. We know more about Marlowe because he was a spy, a student and he was murdered. He was also, in my opinion, a much more original writer who invented the form (Shakespeare was a better man of the theatre). Try, for example, to trace the life of Shakespeare's collaborator Fletcher, or Fletcher's collaborator Beaumont, or the omnipresent Middleton. All of them had longer careers than Shakespeare. All had the occasional hit. All effectively vanished without trace. Nor is it a credible argument that Oxford or Bacon wrote the plays under pseudonyms. There was absolutely no reason to - Queen Elizabeth and King James both loved the theatre and any aspiring favourite could win big kudos by being theatrical, hence so many patronised acting companies. Bacon was a decent writer of factual prose, Oxford's surviving fragments are amateurish in the extreme. 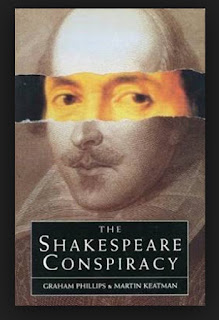 Having got that off my chest, what of The Shakespeare Conspiracy? Well, Phillips and Keatman get my attention because they accept that the merchant of Stratford wrote the plays. They tackle the other question, why is so little known? They conclude it's because he was a spy. Well, Marlowe certainly was, Jonson might have been (personally I think he just grassed up his peers) and Anthony Munday, a playwright of almost zero merit, probably was. To support their theory they revert to the game of literary clues. Ingeniously they take the frontispiece of the Sonnets and the mysterious Mr WH. How is WH the 'onlie begetter' of poems that the title credits to Shakespeare? They spot that there are superfluous full stops everywhere. Take one out and you get Mr W Hall, who they have traced in the records of the spymasters. Was this Shakespeare's alias when working undercover? They say yes, obviously, ignoring the quibble that everyone Hall was associated with in the archives did not use an alias. They then go on to try and link Shakespeare with the Gunpowder Plot, which is silly but no more so than the Bacon or Oxford theories. They argue that Shakespeare ended up related by marriage to several of the plotters - an argument so complex that I couldn't make head nor tail of it.

Great fun. The best of its type that I have come across lately. To be read for sheer amusement and to learn more about conspiracy than  about Shakespeare the man.
Posted by rogerwood at 15:22