Given my long fascination with horror fiction it seems remarkable that Ancient Images (1989) is the first Ramsey Campbell novel I have read. 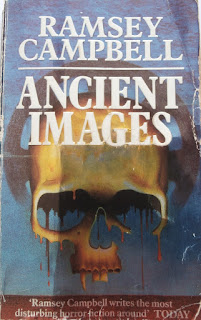 Campbell has been writing since childhood and thus is very unlikely to make mistakes with construction or deployment of plot. In this book, at least, story is absolutely everything. Ostensibly it is about a suppressed British quota quickie movie from 1938 starring Boris Karloff and Bela Lugosi. Sandy's friend Graham, a researcher in forgotten films, has managed to track down a copy but before he can show it he 'jumps' off the top of a block of flats. The film itself has been stolen. Sandy, a TV film editor, sets off in pursuit.


Her quest takes her into Wicker Man territory where she tracks down some truly ancient images which seem to be mirrored in the film, and some very ancient versions of those who had repressed it. To say more would be to give the game away.


Campbell wisely sets all the events of the past within a very contemporary picture of England at the time he wrote it. The Right Wing Press and TV is full of stories about Enoch's Army, a tribe of New Age travellers, who Sandy comes into contact with several times. They, of course, hark back to a way of life in the deep past from which the 'ancient images' stem.


Campbell manages to keep the action moving, the tension building. Until the climax everything supernatural is half-glimpsed, and when the climax comes it is allowed to unfold at exactly the right pace for me. The characters are well-drawn. It is a masterstroke to have a female protagonist who can be intimidated in very different ways to the men who preceded her on the quest. Sandy is exceptionally well-drawn. The places she visits are all made distinct and - those I know - realistic. The idea of the film, Tower of Fear, is wickedly reminiscent of all those horrible clunkers Karloff and Lugosi churned out in their declining years - right down to ghastly music hall comic relief.


I was entertained and impressed. Ancient Images certainly won't be my last foray into the world of Ramsey Campbell.
Posted by rogerwood at 15:34