Published in 2010, Angelica Lost and Found was Hoban's last book. He died the following year. His powers clearly were undiminished to the end. Angelica bristles with ideas, invention, and joie de vivre. 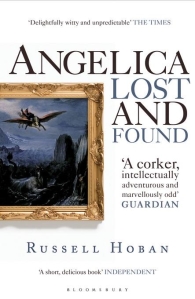 For those who have not encountered Hoban before, the concept takes some swallowing. Here goes---
Volatore the hippogriff (offspring of a griffin and a mare) has escaped from Girolami da Carpi's painting of a scene from Ariosto's Orlando Furioso, specifically the scene from Canto IV in which Ruggiero, aboard the hippogriff, rescues the naked Angelica from the sea monster Orca. So far, so straightforward, yes? Hoban's Volatore has been enthused by the idea of a naked Angelica, so he sets out to find his own, in post-Millennium San Fransisco. As you do. The Angelica he finds is the gallerist daughter of two painters. She likes the idea of an amorous hippogriff and they have sex. They then become separated. And it is Angelica who embarks on a quest to find Volatore.


She finds a number of men who smell like Volatore, some of whom even call themselves Volatore, but none of them actually are Volatore the hippogriff. There is the painter who can't remember painting the painting of tiny elephants and the Hollywood hairstylist who buys it and then chucks it into the bay where Angelica and her psychiatrist lover fish it out. Meanwhile Angelica adopts a cat and Volatore enters a Russian man's penis.


I think this is one for specialist tastes. I loved it.
Posted by rogerwood at 14:39