I think I must have missed a couple of instalments in the Logan McRae saga. I knew that Logan had given up the big city (Aberdeen) in favour of a rural posting (Banff) back in uniform. I knew he had taken up with the Goth beauty Samantha and that he had been the surrogate father for at least one of DCI Steel's children. But I didn't know that Samantha was in a vegetative coma following an attempt on Logan's life or that the urbane gangland fixer John Urquart had bought his old flat for a ridiculously overblown price - that is to say criminally, comproimisingly inflated. 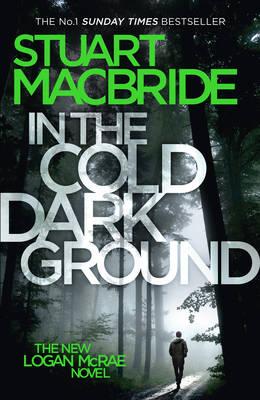 In the Cold Dark Grave is Logan's tenth outing. His search for a missing person leads to a naked male body in the woods. His head is covered with plastic and his body has been bleached to remove any forensic traces.These are the signature stylings of Malcolm McLennan, "Malk the Knife", gangland supremo of Edinburgh. The dead man turns out to be a partner in a shipping business with apparent links to McLennan. The other partner is missing - but turns up safe and sound back home. Meanwhile the police inquiry, now headed up by Steel's MIT unit, discover the dead man's collection of graphic homemade porn. Turns out his partner was a partner in every sense...

Logan has to cram in a lot of funerals over the coming weekend. First he has to pull the plug on Samantha as the palliative care team at her nursing home have given up hope. At the same time he is called to the deathbed of the Aberdeen kingpin Wee Hamish Mowatt, who has always been oddly fond of Logan and who now wants him to take over his empire. The other contender, the ultra-thug Reuben Kennedy, begs to differ. To top it all off another angry female officer, Superintendent Niamh Harper, takes charge. She seems to have taken against Logan for no reason. But there is a reason - and it's a good one.

MacBride is on top form. Some of the wisecracks are laugh out loud funny, the action dark and bloody, and the plot, despite its complexity, remains somehow credible throughout. The crime is always just an inciting incident in the McRae novels, but here it remains logical and brilliantly deployed. I didn't guess who did it or who the mole on the police team was, but the clues were all there. I say it again, Brilliant.
Posted by rogerwood at 15:32