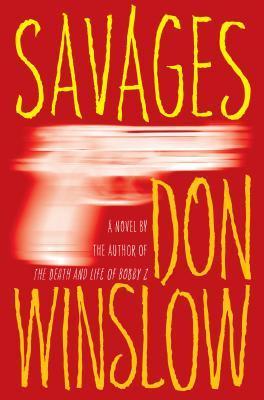 Savages (2010) comes between The Power of the Dog and The Cartel. It is connected in so far as it is set against the cartel wars in Mexico which are the subject matter of the two linked novels. Some of the key characters in those get a mention in this. Otherwise Savages is very different. The Power of the Dog and The Cartel are like James Ellroy on good cocaine rather than bad speed. Savages has flavours of Elmore Leonard and Carl Hiaasen and the texture of George V Higgins stripped down.
What? you wonder. Can you get more stripped down than George V? Winslow can. As The Donald might say, Bigly.


As an indication, we have 290 chapters in 302 pages. Some lines are so fragmentary they don't have full stops. Sometimes Winslow takes the time to explain the etymology of some of his acronyms. Ophelia's mom, for example, is Pacu - Passive Aggressive Queen of the Universe. Others you are left to work out for yourself. Some passages are presented as movie script - a fun inside joke once you realise that Oliver Stone had bought the movie rights before Savages was even published. I have mentioned the Stone movie before. It's his best in twenty years and well worth a watch. But it's not as good as the novel.


Ben and Chon grow dope in South Orange County, the best dope on the market. Ben is a third world activist, Chon an ex-SEAL who has served in all the nastiest theatres of post-millennium war. Ben and Chon are best buds from childhood. They are both in love with Ophelia, who calls herself simply O. O loves them both equally.


But then the Baja Cartel seeks to muscle in on their action. Ben and Chon say no. They are happy to walk away and leave the Baja Cartel to it, but the Cartel says no. They want to market Ben's genetically modified blow. They want the boys' market, they want their people. And to make their point, they kidnap O and threaten to dismember her with a chainsaw.


Which is when things get really nasty...


The pace is relentless, the action bloody. Yet Winslow's gift is to stay perfectly balanced on the thin line between violence and schlock. Even the worst of the bad guys have backstory, people they love. The characterisation is rich and varied. It is, in short, a masterpiece.
Posted by rogerwood at 15:18