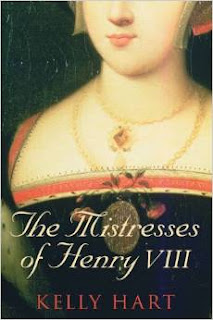 Hart started something of a trend when this book appeared in 2009.  Before that, everyone knew that King Henry had one illegitimate son, the Duke of Richmond and Somerset (the double duke) by Bessie Blount, who became the king's mistress shortly after the birth of Princess Mary.  Most people also knew that Mary Boleyn preceded her sister Anne between the royal sheets.  Mary did not rise so high as her sister, nor did she fall so far and so fatally.  What Hart brings into the equation is the question of whether Mary Boleyn's two children, Catherine and Henry Carey, were actually the king's by-blows.  Sure, many people have thought they were, over the years, but Hart discusses the matter in detail, laying out the pros and cons without coming to any firm conclusion.  My suspicion is that she feels the Carey siblings were half-Tudor.  I base this on the lack of similar discussion about other proposed bastards, all of whom are dismissed out of hand.  It is interesting (and I did not know this) that Catherine and Henry flourished at court - but, of course, they were Queen Elizabeth's cousins in any event.  My own favourite potential royal bastard, Ethelreda or Audrey Malte, is one of those summarily dismissed by Hart.  But she too moved in royal circles (serving Princess Elizabeth during her time in Tower) and might have risen higher had she survived Mary's reign.  What is certain is that Henry VIII gave Audrey land and money - this from a man who didn't even pay for the funeral of his acknowledged bastard Richmond.  In the end, we can only speculate, which Hart does very well.

Her main problem, though, is that there weren't enough mistresses to warrant a full-length book.  So she speculates about who may or may not have slept with the king over the years.  Many are only snide remarks in Ambassador Chapuys' reports to the Emperor.  Others are confused within their own families - for example Mary, Madge and Margaret Shelton; only one did the deed with the dude, but which one?

She also fills space by tracing the family connections of her protagonists.  She makes too much, I feel, about cousins in an environment where everyone was to a greater or lesser degree the cousin of everyone else.  Similarly, she relies overmuch on what the Church considered a proscribed degree of consanguinity and the status of sisters-in-law.  The crowned heads of Europe were accustomed to give not a toss about such things, save where it suited them.

Nevertheless, this is a well-written and thoroughly entertaining read.
Posted by rogerwood at 17:56