Her Husband - Hughes and Plath: A Marriage - Diane Middlebrook 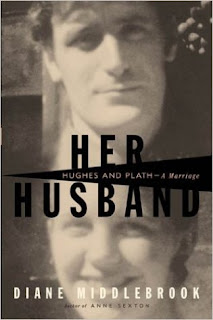 The title is well-chosen.  Middlebrook, an eminent US scholar and poet who sadly died in 2007, just three years after this major work was published, focuses on the marriage itself and the art that resulted for both protagonists.  Of course an account of their very different childhoods is essential context, but Middlebrook keeps it short and to the point.  What matters for her, and for us, is their coming together and their creative partnership.  Likewise, Plath's end has to be there - it changed everything and will always colour our perceptions of surely the most accomplished poetic couple.  Middlebrook does this very well and very fairly.  Plath killed herself because she was ill.  She had always had mental problems and had been hospitalised after a suicide attempt as a teenager.  Hughes's humiliating affair with Assia Wevill can't have helped but it certainly wasn't the trigger.

The first two-thirds of the book are exemplary.  Of course as an American, a woman, a scholar and a poet, Middlebrook feels more attuned to Plath and her work.  I am a man, an academic, and an English northerner born in same Pennine post-industrial wasteland as Hughes, so naturally my affinity is with him.  For me, the final third of Her Husband falters slightly, though I do not know what Middlebrook could have done to improve the situation.  Hughes and Plath were still married when she died.  Her estate automatically came to him.  He oversaw its publication but - some would say infamously - removed unfortunate references to himself and others.  Without him The Bell Jar would not have become a core feminist text, Ariel would not have cemented Sylvia's reputation whilst the memory of her was still fresh, and the Journals would likely not have surfaced until after his own death in 1998.  Because he edited them, there are other versions out there and a thriving trade has emerged in Plath's literary afterlife.  Middlebrook treats Hughes's work as editor with an open mind; the problem is that she feels obliged to also consider his personal work, which does not appeal to her so much. This in turn leads to rounding-off his biography and his reprehensible behaviour to other women in his life.  To my mind she would have been better sticking to her thesis - the marriage of minds and talents with a survey of Plath's legacy as managed and manipulated by 'her husband' as an afterpiece.

It is, nonetheless, the best Hughes/Plath study I have read.