The Death and Life of Sylvia Plath - Ronald Hayman 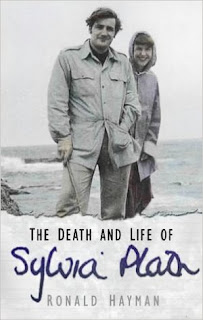 It's an odd book, first published in 1991 when Ted Hughes and his sister Olwyn were both still alive, still exercising their notorious stranglehold over the Plath estate, and revised in 2003, after Hughes had died and more material had become available.  Revised, but not rewritten - you sense, as you read, that some of the old material still pokes through where the new is available and indeed given.

Hayman tries to be even handed; he shows that Plath was demanding and ultimately deranged, but she is nevertheless his subject and protagonist, and Ted Hughes is always referred to by both names and thereby distanced.  There are some very good parts.  I personally enjoyed Hayman's critique of the sole radio play, Three Women.  I felt less confident with his reading of some of the later, indeed last poems.

The style is simple and direct, even in extrapolating the unfathomable (Plath's most elusive poems and her roiling psyche), and wisely doesn't do what Middlebrook too often does in her study of the marriage (see below) - he doesn't try to show off his own literary talents.

The Death and Life is therefore a slightly odd construct but it's a good book and essential reading for Plath enthusiasts.
Posted by rogerwood at 13:12