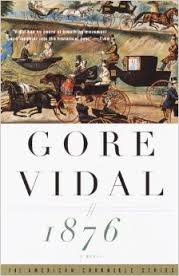 I keep reading Gore Vidal's novels over and over.  I must have read Burr at least three times, and 1876, in most ways its successor, twice.  Both feature Charles Schermerhorn Schuyler, illegitimate son of Aaron Burr and half-brother of the similarly illegitimate President Martin van Buren.  Van Buren and Burr are obviously real but Charlie is fictional, and possibly Vidal's most beguiling creation.  Journalist, author, friend of great men - Charlie is sent to France in the 1830s and only returns to America for the Centennial, together with his devastatingly beautiful daughter, the Princess d'Agrigente.

Scratching for a living and hoping for an ambassadorship (the ambassadorship, back to France) he spends the entire year in New York and Washington.  As a political animal, he is much more interested in the presidential election than the centenary celebrations or even the dying days of President Grant's corrupt administration.  Schulyer's candidate is the Democratic Governor of New York, Samuel Tilden (below, top). Various Republican aspirants come and go until, almost in desperation, the party fields the unknown Rutherford B Hayes (below, bottom). 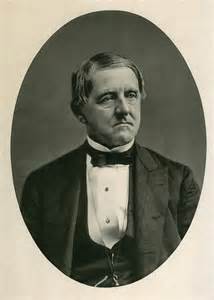 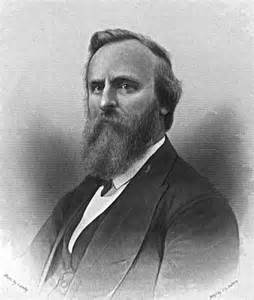 No doubt Vidal's American readers all know the outcome.  As a non-American I knew of Hayes but had never heard of Tilden before reading 1876 the first time.  In fact Tilden won the election - that is to say, the popular vote - by a considerable majority.  But the electoral college was rigged so that Hayes became the winner, ultimately voted in by Southern Democrats in return for a pledge, which he kept, to pull the troops out of the last unreconstructed Confederate States.

This is the advantage of reading good books twice.  The first time predated the Millennium and I felt sure, at that time, that ballot rigging on such a scale could not happen again.  Then George W Bush contrived to 'beat' Vidal's cousin Al in a state controlled by his brother Jeb.  Thus the lessons of history go unlearned.

Overall, though, re-reading the same books repeatedly at my age is not a good idea.  I should focus on reading the other five novels of the Narratives of Empire, and then perhaps move on to the Breckenridges, Myra and Myron.