Some Other Place, The Right Place - Donald Harington 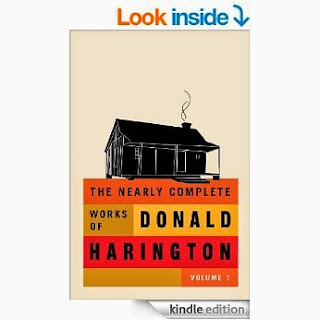 The second of Harington's 'Stay More' novels, dating from 1973 and somehow or other filmed as The Return (1985).  I haven't seen the movie version but I'm guessing much was omitted.  For one thing, it is a colossal read; indeed I just couldn't keep at it and I have actually read the book over several months.  Not that I got bored with it, far from it - every time I thought 'Harington can't get another twist into this', he did.  As with Lightning Bug (see below) he uses different voices expressed in different typefaces, but here he also uses narrative poems and various levels of reality.  Just as Harington featured in Lightning Bug, here he features as an adult called G, a deaf professor of fine art who gets embroiled in the search for a missing teenager, Diana.  Diana is voluntarily missing.  Driving home from college she hit a pothole and had to stop in New Jersey for repairs.  While waiting she saw an article in the local newspaper about an 18 year old local lad, Day, who seems to recall a former life under hypnosis.  Diana is intrigued because Day claims to be recalling the life of Daniel Lyam Montross, her maternal grandfather.  Daniel kidnapped Diana as an infant - her rescuers shot and killed him.  Eighteen years later Diana persuades Day to run away with her.  They travel across New England and, later, Hillbilly country, moving from lost township to lost township, guided by the 'memories' of Daniel Lyam Montross.  Eventually - and I do mean eventually - they arrive in Stick Around, the place Daniel hid with baby Diana and where he died.  This is where G, who also remembers Stay More/Stick Around from his own childhood, finds Diana, happily and heavily pregnant.  Day, it seems has died, apparently a suicide.  But nothing in Some Other Place... is as it seems.  Not even death is certain.

I loved Some Other Place and am girding my loins before tackling the third installment The Architecture of the Arkansas Ozarks. But not just yet.
Posted by rogerwood at 18:12