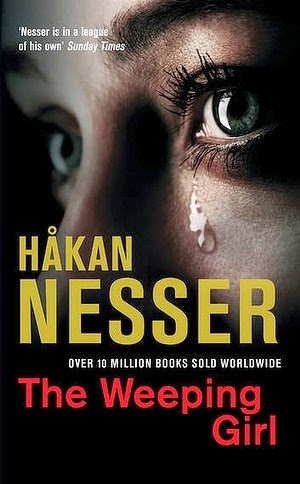 Book 8 of the Inspector Van Veeteren series is distinguished by not having Van Veeteren in it until the very end and then not in connection with the main storyline.  I rather wish Nesser had found the resolve not to include him at all.  It seemed forced.

Anyway, this is the Nesser novel I have liked best to date.  I have always be fascinated by his odd fictional nowhere location that's a bit like Holland but isn't really.  What has let down the series for me has been the involvement of too many detectives, which splinters the storyline.  Here, Nesser takes the most interesting of Van Veeteren's former team - the only woman, Ewa Moreno - and takes her out of the usual Maardam setting by cleverly taking her on holiday, yet giving her credible police work to do by interviewing a supergrass in Lejnice, near her holiday spot.  On the train she meets the weeping girl whose subsequent disappearance involves Ewa on the periphery of the official investigation while she independently opens up a monstrous can of worms involving a murder in the town sixteen years earlier.

By only having one investigator Nesser frees up the space necessary to fully explore that earlier murder and the circumstances which led to it.  He held me enthralled - right up to the moment Van Veeteren stuck his nose in, when I would have reached for the editing tool.

There's a cracking review by Pam Norfolk, whose view differs from mine, here.