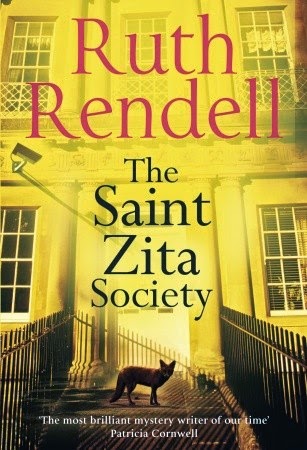 A recent (2012) addition to the oeuvre, this is one of Rendell's stand-alone London underbelly novels, chronicling the criminality that goes on our very doorstep and the psycho next door.  In this instance the psycho is Dex, who thinks his phone is God (a clever conceit in itself).  It is not Dex who starts the murder ball rolling but he does his bit to finish it.

I love the setting - a very select square in what I thought was Chelsea but which turns out to be Pimlico.  I don't much care for the society formed by the 'servants', which only really serves as a device to get the core characters together.  The characters, though, are a fascinating bunch, from nanny Rabia, to so-called au pair Montserrat, to June, in service for sixty years to the "Princess" and Thea, who insists she's not a servant at all and gets dissed in the street for having red hair.  The characters I've listed are all female.  There are lots of male servants as well but none of them caught my interest in any way.  I would have liked more time with Dex in particular.

So, not one of Rendell's very best.  Then again, Rendell's second rate is ten times better than most people's best.  She really is, as Ian Rankin says on the back, the world's greatest living crime writer.

Saint Zita, by the way, is the patron saint of skivvies, apparently.
Posted by rogerwood at 16:32