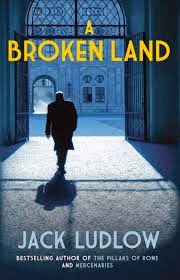 A Broken Land is the second in Ludlow/Donachie's "Roads to War" trilogy, featuring not-quite-a-gentleman adventurer and arms dealer, Cal Jardine.

The land broken is Spain as the Civil War breaks out in 1936.  Cal is Barcelona supporting British entrants to an alternative Olympics, an event which, if it happened had passed me by entirely, and if not is a brilliant concept.  His boxer buddy Vince is there as trainer and Cal is busily fraternising with the locals in the shape of anarchist translator Florencia.

I like many things about this second instalment, largely because it didn't go quite the way I anticipated after reading the first, The Burning Sky (see below).  Many characters return - one in a unexpected twist late on in proceedings - but Vince, for example, goes home to London halfway through.  Florencia is one of the big differences.  In Burning Sky Ludlow seemed uncomfortable with his one significant female character, who was relegated much of the time to off-screen women's stuff.  Here Florencia is active in all regards, a richly drawn character whose fate we care about.  I also liked the fact that the historical conflict is not resolved but Cal's personal conflict is.

The series gets better book by book, and it started pretty well.  I am desperate now to lay hold of volume three.
Posted by rogerwood at 12:15