The Man Who Was Saturday - Patrick Bishop 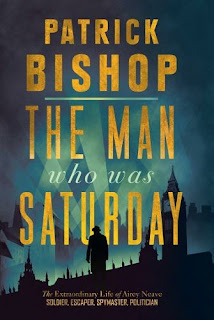 The problem for a biographer of the politician Airey Neave is that it was interesting at the beginning and at the end with nothing of interest inbetween.  As a young man in World War II he escaped from Colditz and was the first British escapee to make it all the way home.  He went on to work with resisters in occupied Europe but, worthwhile and commendable as this was, he did most of it from a desk in Whitehall.  After the war he became a Tory MP, spending 30 years as an unexceptional backbencher.  In 1975 he organised Margaret Thatcher's successful bid for the Tory leadership.  She naturally offered him any job he wanted in the Shadow Cabinet and he chose, as his first and only front bench job, Shadow Irish Secretary.  This of course was towards the beginning of the Troubles in Northern Ireland.  Bombs on the mainland were starting and the IRA was splintering into ultra-violent factions.  One of these was the Irish National Liberation Army, which on March 30 1979 blew up Neave and his car as he was leaving the underground car park of the House of Commons.

In his lifetime Neave was known for the Colditz escape.  Now he is remembered, if at all, for his horrible death.  Those are the two events that interest Bishop in this book.  He provides good context for each and there was much that was new to me in relation to the Irish situation in the Seventies.  My main interest in seeking out the book, however, was another military disaster which Neave was witness to, and which he went on to write about - the siege of  Calais in which hundreds of allied troops were abandoned to fight to the death and so occupy the German army whilst the rest of the failed British Expeditionary Force was evacuated from Dunkirk.  Neave was there with a non-combatant searchlight squad (something I had not heard of).  He was wounded early on, quite seriously, and was ultimately taken prisoner.  There was enough here to satisfy me that I really need to get Neave's own book on the episode.

The problem, as I say, is the yawning 30-year gap in the middle.  Neave was happily married and kept busy with constituency work, work for an engineering company that employed him, and with a reasonably successful writing career.  But it's not enough to fire up any biographer.  When Neave accidentally finds himself wheeling and dealing over Mrs Thatcher's future, this reader can't help wishing he had failed.  I lived through Thatcher's reign of terror and I roundly hated her.  Neave, of course, didn't live to see what he had inflicted on his beloved country.  Bishop tries to mollify my kind of reader with regular disclaimers of the 'he probably wouldn't have agreed with her more controversial policies' variety.  Oh yes he would.  He put up with the senile Churchill, the useless Eden and the appalling Heath (who he actually hated).  Monetarism, deindustrialisation and mass unemployment were hardly going to worry him.