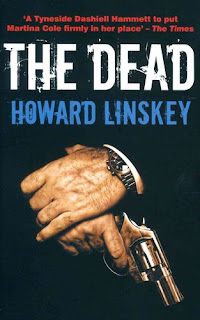 There's a hell of a lot of story here in much fewer pages than most contemporary crime novels.  I find that extremely impressive.  Either Linskey writes like a dream or he is careful to revise as he goes.  I don't see that you can produce this standard with the get-a-first-draft-done-and-fic-it-later method.

There is also an apparent mountain of pre-story, carried forward from the previous two books which I haven't read.  No problem, Linskey gives you the exposition you need when you really need it; in the meantime, he cleverly lets you draw your own conclusions.

David Blake, at forty, has risen to the top of the crime tree in his native Newcastle.  He is married with a baby daughter.  Like any good modern entrepreneur he is already planning his exit.  But first he has unfinished business, like who killed his father, why and (unusually) when.  Then there is a Russian ex-pat zillionaire who wants to use his drug lines to smuggle men and arms into Russia.  But, most pressingly, the daughter of Blake's bete noir in the police force has just been brutally murdered and Blake's name is very much in the frame.

As I say, I was extremely impressed with this book.  I know Newcastle pretty well and nothing here jarred with me.  The story moved along at a bracing pace yet there were terrific character studies here too.  I shall be reading more Linskey.